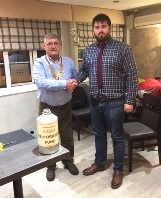 The Rotary Club of SWF enjoyed an interesting presentation by James Morgan of the Steam Tug Brent Trust. www.steamtugbrent.org

A great deal of work is being carried out by the

Due to enemy action throughout World War II, many boats and ships were sunk or destroyed by hitting mines, being torpedoed or bombed by aircraft. Major ports and docks were important targets and in London in particular they came under heavy and sustained attack.
As a result and with increasing  Naval operations, by 1942 steam tugs were urgently needed for War duties both in the U.K and overseas and the British Admiralty requested the construction of a standard 'Utility' vessel, which could be built quickly and easily using revolutionary construction methods of welded flat plate construction.
Known as 'TID's', 182 of these little prefabricated tugs were built in modular units, by several different yards around the U.K. often by women workers. Brent started off as TID 159 and was the very last of her class to be built being completed in 1946.

Saved from scrap in 1970, Brent was rescued and cared for by the Hall family of Maldon, Essex who used her as a holiday 'tug yacht' for nearly 40 years until the need for major repairs caused her to be laid up. She was donated by the family to the Steam Tug Brent Trust a registered charity in 2011 and can be seen at the Maldon Quay.

The charity is endeavouring amass funds to preserve the Tug Boat Brent and make the repairs that are now necessary and Rotary have agreed to give a donation to the trust.