Theresa McEwan gave a narrated slide show about the work of Mary’s Meals formally known as the Scottish International Relief. Mary’s Meals is a non-denominational charity that provides a daily meal for children in their place of education in approximately 20 countries throughout the world. In total about 2.3 million meals are provided every day. The cost of providing a meal for one child for a whole year is £15.90. 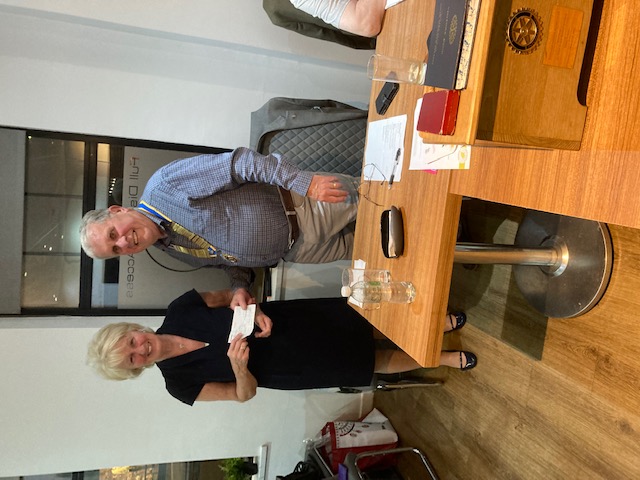 Theresa, pictured, received a cheque presented by Mick Fry the President, towards the work that goes on in the countries in which they were active.

This all started when two brothers, Magnus & Fergus were enjoying a pint in their local pub during the Bosnian conflict when a TV news program reported the suffering that was being endured there. They spent that evening talking about ways they could support the Bosnian relief effort. The brother decided to organise a local appeal and they were inundated with offers of food, clothing, medicines, and donations of money which arrived at their home. They borrowed a van to take out the donations to Bosnia but on arrival back home they saw that more goods were being donated, so a number of more trips saw the birth of their Marys Meals organisation to continue worldwide to feed the children in need.